So where does free speech reign supreme? Most of us know that at a private place of business, one’s free speech rights are virtually non-existent. While free speech is restricted in private employer relationships, there are some occasions when the free speech might not be the actionable issue, but instead the issue might be, among other things, religious freedom, or a whistleblower claim, or a sexual harassment complaint, which are actionable. Yet we all still know that you can’t tell off the boss and expect to keep your job. 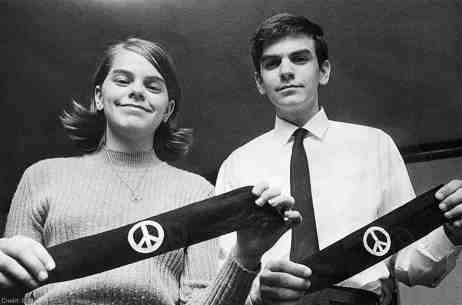 Now what about free speech in the public arena? Not enough time to discuss public employment today, instead I want to address public school free speech. In a recent DeKalb County, Georgia, case, Keegan Brooks, a freshman at Chamblee Charter High displayed and distributed stickers that called for the firing of the school principal. Amazingly, the school hierarchy, having no sense of humor, took offense, and gave the young man one day of in-school suspension. His family sued.

There must be a legal standard for these types of cases, right? In 1968, The U.S. Supremes heard the case of Tinker v. Des Moines Community Independent School District, where a brother/sister duo wore black armbands with the “peace” symbol on it. The dastardly siblings were promoting an end to the Vietnam War, memorializing the war dead and calling for a Christmas truce. Egad, the nerve.

The Supremes went 7-2 in favor of the free speech, holding that, absent a substantial disruption, the speech was allowed. Justice Abe Fortas said, “In our system, state-operated schools may not be enclaves of totalitarianism. School officials do not possess absolute authority over their students.” Fortas famously opined, “It can hardly be argued that either students or teachers shed their constitutional rights to freedom of speech or expression at the schoolhouse gate.”

Back to young Mr. Brooks, the school system decided that additional training of school administrators was a better idea than fighting the suit. They also ponied up $45,000 for Mr. Brooks’s pain and suffering. Good for him.

Having had kids in Houston County schools for 26 years, I can recall more than one occasion where administrators made a mountain out of a mole hill with something my kids did. Most of the time it was a “life isn’t fair” lesson, but a few times I either met with the school official or called them. My experience was that teachers were reasonable, but administrators were not. In other words, nothing has changed since I was a student in public school. Which brings me to this week’s song, by John Cougar Mellencamp, “The Authority Song.”

What say you? Is “fighting authority” in school the same as always?